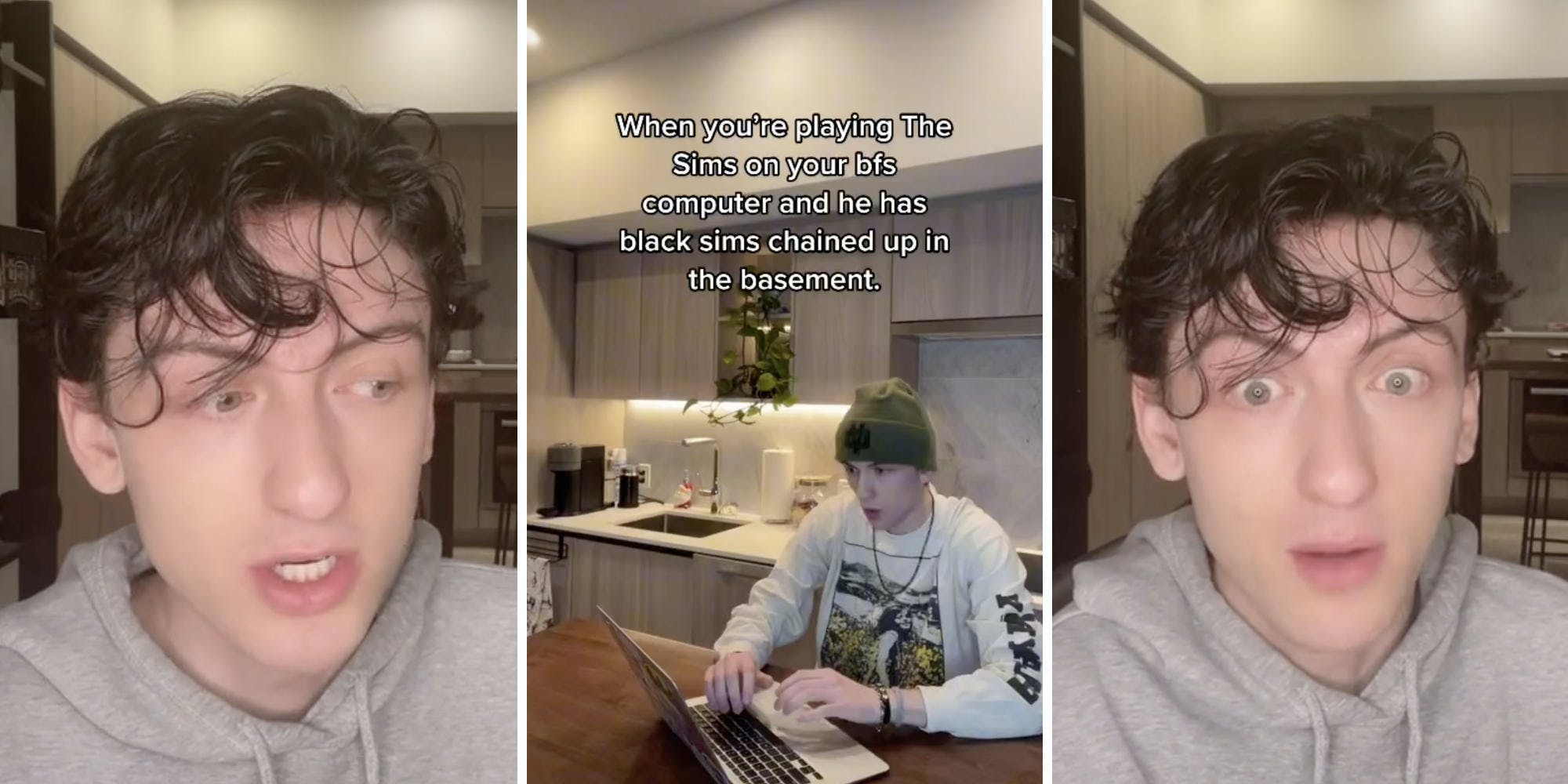 A TikToker says that when playing The Sims on his now-ex’s computer in 2016, he found that his ex put Black Sims in the basement and chained them up.

In the caption of his viral video, which has almost 5.5 million views, TikToker Blake Babin confirmed that the TikTok was a “true story.” Babin used the “that’ll do it, you don’t have to worry about me” TikTok sound and reenacted himself finding the Sims, putting on his coat, and leaving.

In a follow-up video explaining the situation, Babin says that the “relationship [ended] not long after” the Sims incident.

“He was a racist, he was kind of like a misogynist, he was a cheater,” Babin says of his ex. “He always had his phone faced down, I’m shocked I was even allowed on the computer because of how secretive he was.”

Babin says that he was at his ex’s apartment and on his computer while his ex was cooking. While going through his ex’s Sims game, saw the Black Sims chained up in the virtual basement, and confronted his ex about it. The TikToker says the ex said it was “nothing.” Babin also says that his ex used to “point out Black individuals on the street.”

“It makes a lot of sense now knowing who he is and what he was about,” Babin says in the TikTok. “He took the computer from me, he made light of it, he closed it, and just moved on really quickly.” Babin also said that the Sims in question were “working slaves.”

Some commenters on Babin’s follow-up TikTok expressed disapproval for the ex, and others wondered how much longer Babin stayed with him after he found the Sims.

“That’s actually deranged,” @flyingwig commented. “Glad you got away from him.”

“He really took the time to get [Sims] Custom Content to do this huh,” @gracemaebrown wrote.

“The relationship ended ‘not long after this’.. so what defines not long after..?” @azurites wrote. “Cuz it [should’ve] been immediate.”

“‘Not long after’ [isn’t] sitting right with my spirit,” @kagurasbayangs commented. “[Please] clarify.”

“I just feel like incidents like this aren’t usually the first time ppl learn their partners are racist,” @stvnis21 commented. “Very interesting that you even dated him.”

A few commenters defensed Babin’s description of when the relationship ended.

“‘Not long after’ is probably that day after they spoke or even a week later. He left,” @urthebeeskneespal wrote. “It takes time and power to leave abusive partners. We don’t know.”

“We don’t know the situation and he also mentioned this was 5 yrs ago,” @carme6n commented.

The Daily Dot has reached out to Babin via Instagram direct message, and EA Games, which makes The Sims, via email.

Tricia Crimmins is the IRL staff writer at the Daily Dot. She is also a New York-based comedian studying at Columbia Journalism School. Previously, she has written for Mashable, Complex Networks, and Moment magazine. She can be found on Twitter at @TriciaCrimmins.

Previous post Total Market will Reach $9.2 Billion by 2027 with the Enterprise Segment Accounting for $3.57 Billion