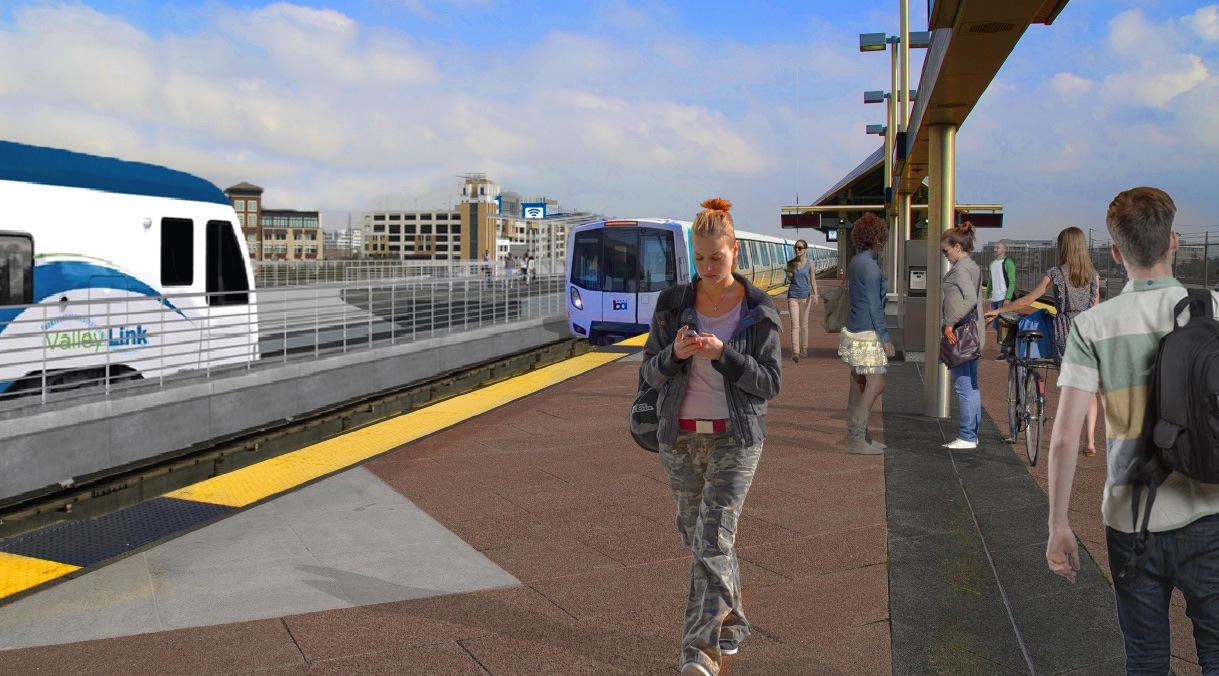 Two groups have teamed up in a lawsuit to stop development of the Valley Link commuter light rail system, which proposes to add seven new stations along a 42-mile corridor between the eastern Dublin-Pleasanton BART Station and the planned Altamont Corridor Express North Lathrop Station.

The Alameda County Taxpayers’ Association and the Transportation Solutions Defense and Education Fund are named as petitioners in the suit filed Monday in Alameda County Superior Court, along with Marcus Crawley — who is president of the taxpayers’ group — and Oakland-based Montclair Village Hardware.

“The Legislature created the authority to close a five-mile gap between BART and ACE, but their ‘mission creep’ resulted in a project 42 miles long. We have to put a stop to this wasteful and illegal empire-building,” Crawley said in a statement.

Attorney for the petitioners, Jason Bezis, said in a statement that the demolition and relocation of Interstate 580 to make room for the Valley Link tracks would be a waste of more than a billion dollars, “tearing up 11 miles of recently built freeway, adding no transportation capacity in itself.”

The lawsuit argues that the transit authority has exceeded its legal mandate. It also alleges that the Alameda County Transportation Commission illegally shifted $400 million in 2014 Measure BB sales tax funds to Valley Link from the proposed BART to Livermore extension project and that the Metropolitan Transportation Commission is illegally funding Valley Link with bridge tolls that are supposed to pay for seismic retrofits.

Valley Link executive director Kevin Sheridan told the Weekly that the lawsuit is “without merit” and that it “mischaracterizes” the project.

He also noted that the lawsuit is untimely.

“The environmental impact report was approved last year and there’s a time period to challenge those documents and there was no legal challenge on the EIR,” Sheridan said, adding that “if there are comments or concerns about a project, the appropriate time to address them is during the environmental process.”

Sheridan is named as a defendant in the suit along with his predecessor, Michael Tree, who stepped down earlier this year after spending five years on the Valley Link project.

While Sheridan said it’s unfortunate that they have to spend time and resources defending the project in this lawsuit, he said that the project will continue to move forward as planned and he is confident that the litigation will not cause any delay to their timeline.

“We have in no way stopped doing what we’re doing and we’re making progress on this project,” he said.

Once in service, Valley Link is expected to provide 74 daily round trips and to carry more than 33,000 daily riders by 2040, eliminating 141 million vehicle miles traveled per year and up to 42,650 metric tons of greenhouse gas emissions.

In addition to the project’s environmental benefits, Sheridan said that getting more cars off the road clears up more capacity for freight and goods movement for the supply chain because less commuters allows for more trucks to be able to move through the highway.

If the project continues on track, the first Valley Link trains could be placed into service in 2028. “This isn't a three way partnership, no longer a best-friends courting or a liaison license, nor a merger or an...

A silver tea carrier and tableware that got to Baltimore author H. L. Mencken and his spouse, Sara Haardt, as...

Whether or not your emblem has been in enterprise for 10 years, 10 months or 10 days, there are key...

Technology
We use cookies on our website to give you the most relevant experience by remembering your preferences and repeat visits. By clicking “Accept All”, you consent to the use of ALL the cookies. However, you may visit "Cookie Settings" to provide a controlled consent.
Cookie SettingsAccept All
Manage consent