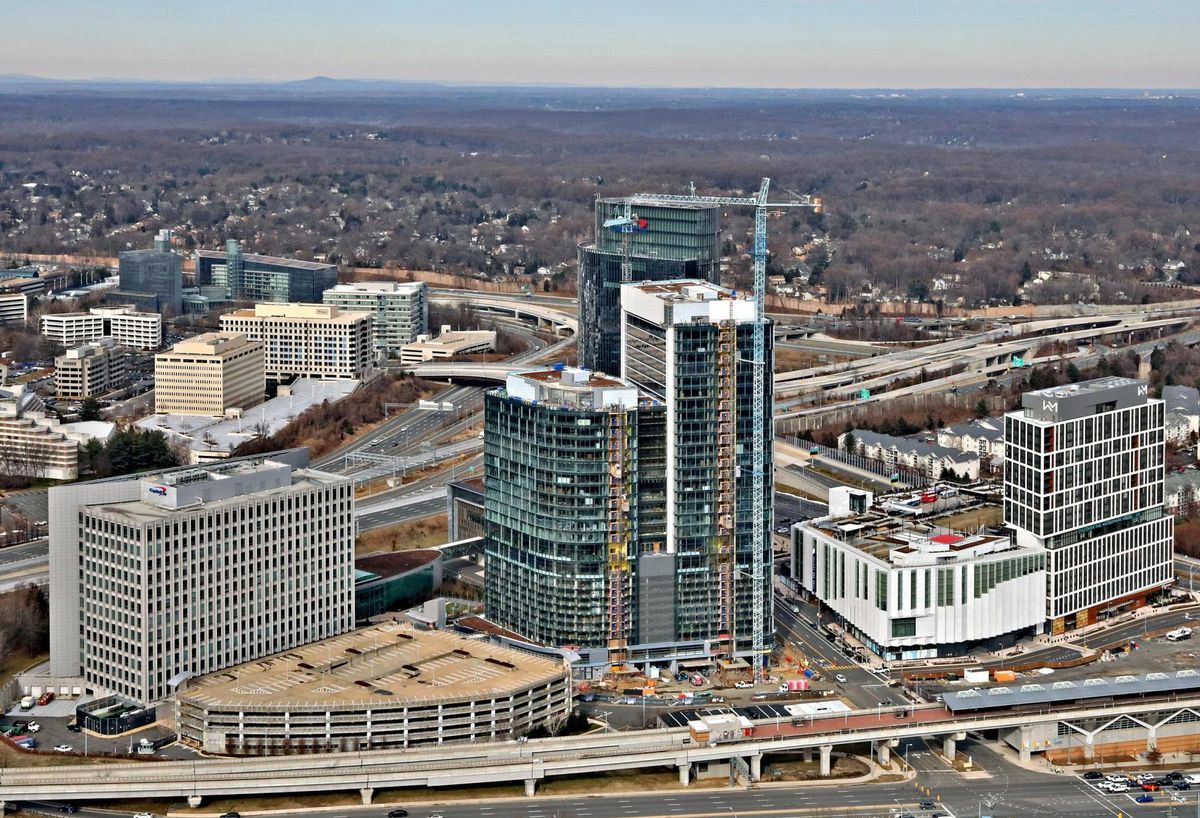 Emily Hamilton is afraid to bike near the Capital One Center, but she’s willing to walk.

The massive development near the McLean Metro station features the tallest building in the D.C. region, Capital One’s 470-foot-tall headquarters, plus a new Wegmans, a performing arts center, a beer garden and other retail, with more development on the way. It is one of several projects that is transforming the eastern part of Tysons.

But Hamilton, who has studied the Tysons area in her role as a senior research fellow and director of the Urbanity Project at George Mason University’s Mercatus Center, said the state road that bisects the area — Route 123 reaches 10 lanes at some intersections — discourages the free movement of pedestrians and cyclists.

“Beyond the basic safety issues, having such a wide street to cross just really increases the distance between destinations and just isn’t as appealing to pedestrians as what we see, for example, in the transit-oriented parts of Arlington, or within Tysons at The Boro development,” Hamilton said.

Courtesy of Capital One Center

Construction on Capital One Center in Tysons

The Capital One Center has 100K SF of existing retail in addition to the office tower, and next year it is slated to deliver a 900K SF office and retail tower, all on the north side of Route 123.

It is connected via a pedestrian bridge to a community on the south side of Route 123 that features several new residential towers, including Skanska’s 410-unit apartment community The Heming, planned to deliver in the second quarter of 2023, and LCOR’s 319-unit Kingston at McLean Crossing.

For those interested in facilitating a more organic connection between the predominantly residential development on the highway’s south side and the office and retail-heavy area on the north, improving walkability is the final step in building a strong community in the area.

The area known to county planners as Tysons East, which includes the Capital One campus and Scotts Run development across Route 123, has seen significant investment over the past decade, thanks in part to a change in Fairfax County’s comprehensive plan that allowed for highly dense, mixed-use development.

But those areas are separated from each other and neighboring developments like the Tysons Corner Center Shopping Center and Tysons Galleria by major highways, limiting the suburb’s ability to truly feel like an urban center.

“Tysons is a great example of successful live-work-play,” said Adrian Conforti, head of Cushman & Wakefield’s Project and Development Services team in the Mid-Atlantic. “The only thing missing here is walkability.”

The issue of walkability is not unique to the McLean Metro station area—other communities, especially those centered around Metro stations, are reckoning with how to transform former suburban office parks into much denser mixed-use communities that are navigable for pedestrians.

The importance of walkability has become especially important to developers as they plot out live-work-play neighborhoods that can attract reluctant workers back into the office and reignite a sluggish office leasing market.

Capital One is among those employers hesitant to bring back workers. Though the financial corporation planned space for 8,000 office workers in the new headquarters, a spokesperson said it has yet to set a concrete return-to-office schedule, opting instead to provide its workers flexibility while continuing to expand the campus’s footprint.

“Our goal has always been to ensure our associate experience is optimized and we look forward to the day Capital One associates are able to safely return to our new hybrid work environment and enjoy the full suite of amenities that our expanding development has to offer,” a Capital One spokesperson told Bisnow in a statement.

The return-to-office is similarly slow across the submarket. The Tysons office vacancy rate was 18% in the first quarter of this year, according to Colliers, and Conforti said daily occupancy was still hovering between 30% and 50%.

“I think long term the investments will pay off, but I think right now there’s still trepidation and we’re still kind of recovering from the pandemic,” said Conforti, whose Cushman & Wakefield team served as development partner on the Capital One Center.

In Tysons, developers and public officials share responsibility for the pedestrian experience. The latest iteration of the Fairfax County comprehensive plan obliges developers to invest in the street grid in their master-planned communities, while planning officials, the Fairfax County Department of Transportation, and the state DOT handle the programming of major thoroughfares like Route 123.

The Fairfax County Planning Commission and Virginia Department of Transportation didn’t respond to requests for comment.

It is clear that officials are considering how to manage the layout of car-centric infrastructure in the growing D.C. suburb. A corridor study for Route 123 begun by Fairfax County in 2019 identified several crossroads where FCDOT could create interchanges to ease traffic patterns, though the intersection of Dolley Madison Boulevard and Capital One Tower Road went unaddressed.

Meanwhile, developers are moving forward on programming their own pedestrian-focused neighborhoods. Cityline Partners, which created the master plan for the Scotts Run development on the southern side of the McLean Metro station, has invested $18M to help build out the area’s street grid, said Donna Shafer, managing director of Cityline.

Shafer said the community is growing quickly, with 4M SF of existing development and 13M SF of development in the pipeline forming a “compelling combined neighborhood.”

“Capital One is an amazing campus, and we do anticipate that some of the 8,000 or so employees expected to office there will want to live within walking distance,” Shafer said in response to emailed questions. “Also, given our proximity to McLean, we fully expect that the residents and workers there will take advantage of all the neighborhood experiences.”

Skanska, too, is pouring a significant amount of effort into amenities and streetscape improvements to attract renters. The developer is actively leasing up the 38K SF of retail at the site, built a 20K SF public plaza connected to Heming and invested in sidewalk improvements at the site, Skanska Executive Vice President Mark Carroll said in an emailed statement.

An aerial shot of the under-construction Heming apartment building, with Route 123 and Capital One Hall in the background

Further improvements are likely. Shafer said the Scotts Run neighborhood group has been meeting to discuss ways to improve connectivity, with more projects to be announced in the future.

She cites the existing pedestrian bridge connected to the Metro station and an additional one planned to connect Scotts Run to the Tysons Corner Center mall as indicators community stakeholders are committed to promoting walkability.

“For meaningful walkability, we need sidewalks that feel welcoming and safe, and connections between neighborhoods,” Shafer said.

Other visitors are also taking advantage of the growing pedestrian infrastructure. The 178-room Archer hotel, which opened in September, has seen strong demand thanks to other neighboring office tenants like Mitre and Northrop Grumman, Shafer said.

Mike Daood, president of Archer developer and operator Lodgeworks Partners, said at a September Bisnow event that the growing mixed-use development in the area would likely bring more business to his hotel on the weekends, supplementing the existing business traveler customer base.

“Tysons made this leap, or this commitment, to a future vision of really being an urban, walkable destination,” Daood said. “And with that comes additional retail, additional entertainment and residential, and that likely, we are betting, equates to more weekend demand.”

Those residents living in the area already have a series of amenities across the highway. Besides the 470-foot-tall Capital One headquarters, the campus also features an 80K SF Wegmans grocery store, a 1,600 seat performing arts center and 20K SF of additional retail, including a beer garden.

Though Capital One isn’t fully back in the office, Conforti said he believes the area still has high potential.

Conforti said the connection to major highways and public transportation, in addition to Virginia’s strong talent pipeline, will continue to bring investment to the Tysons East area going forward.

“That whole area is so energized by the amenity-rich environment, you have so many types of uses all connected there,” Conforti said. “I think the long-term vision for these companies is very bullish … I don’t see that ever going away.” 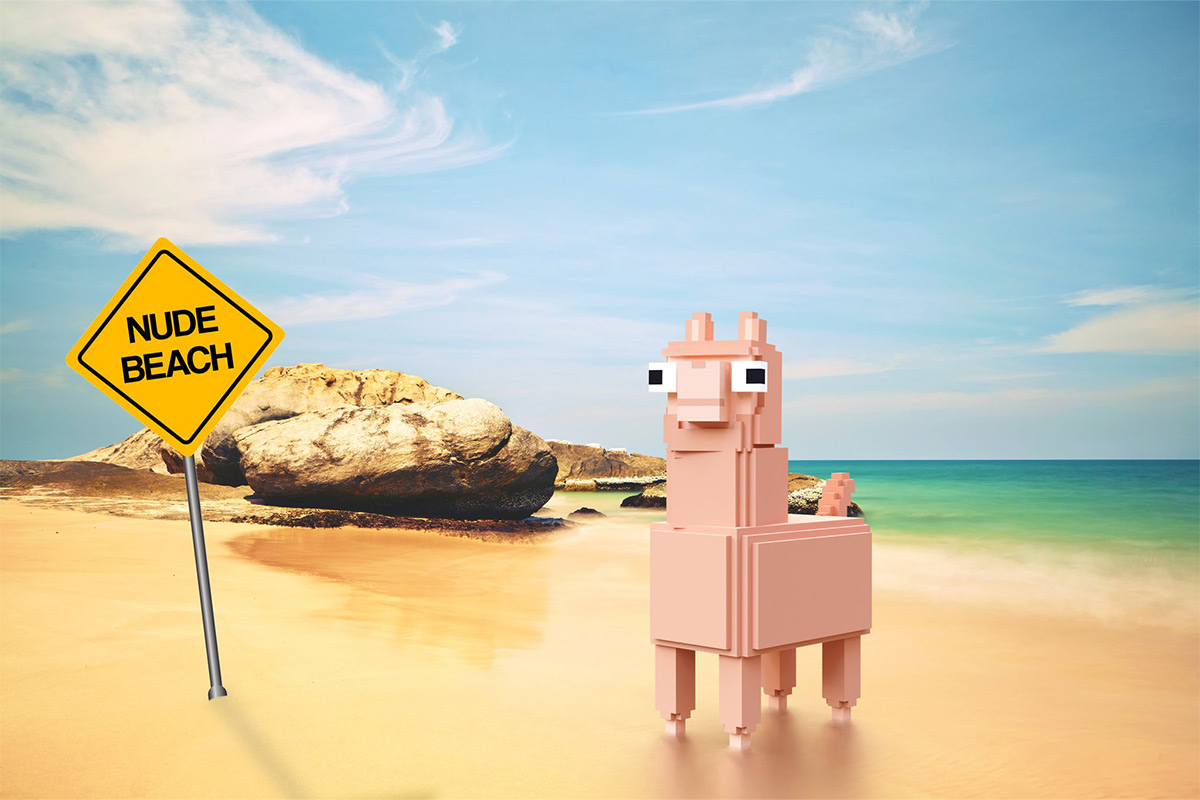 Previous post What you Need to Know About Alpacadabraz, the SmartWatch NFT Collection
Next post Pioneering The Internet’s New Way Of Marketing